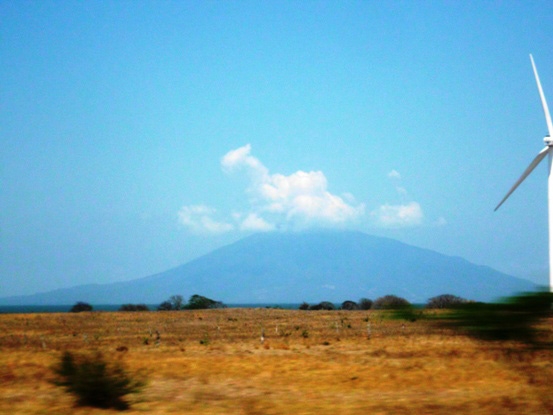 Several Central American countries, including Nicaragua and especially Costa Rica, are internationally-renowned destinations for ecotourism and volunteering with ecological organizations. Both countries, though small, have undertaken ambitious goals to combat climate change, and it's refreshing to see them living up to their green reputation.

If you're headed from Costa Rica to Isla Ometepe - the double-volcano island in the centre of Lake Nicaragua, which everyone travelling through the country should make time to see - you'll like likely cross the border by the Amayo Wind Farm in Rivas, Nicaragua's first wind project and one of the largest in Central America.

Costa Rica's aspirations are similarly ambitious. In 2009, the country's former president Laura Chinchilla set a goal of complete carbon neutrality by 2021. However, unlike in Nicaragua, the numbers today aren't quite as promising. Some Costa Ricans - including the newly-elected president Luis Guillermo Solis and his political party - are beginning to think that Chinchilla's initial timeframe is too short to achieve carbon neutrality.

However, this doesn't mean that the goal will be dropped or that Costa Rica will stop trying. Instead, the new government estimates that it will likely take a bit longer, until 2025, to achieve carbon neutrality if reforms are implemented as planned. If you've ever worked or volunteered in Costa Rica's environmental or ecotourism sector, then you've seen the deep ecological ethic that runs through their foundation, and it wouldn't surprise you if Costa Rica still did achieve its commendable goal in an impressive amount of time.

If you haven't yet travelled to Costa Rica or Nicaragua, now is the time. If you think your own country's measures against climate change are lacklustre at best, perhaps volunteering in the heart of Central American ecotourism is the antidote you need. What are perhaps two of the world's most incredible and sincere renewable energy revolutions are currently in full force in these neighbouring developing nations; why not be there to witness it?