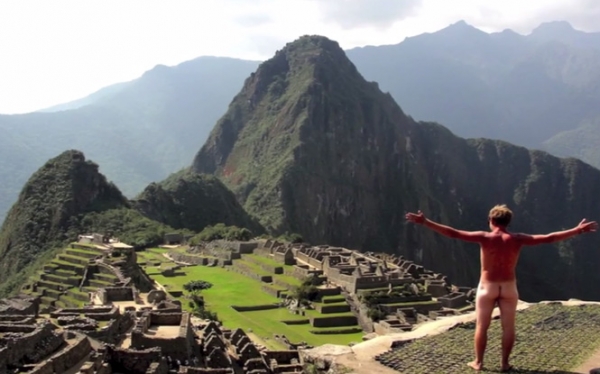 I've never felt the urge to strip-off while visiting famous sites in Central or South America but it appears it’s becoming all the rage amongst holidaymakers and gap-year travellers. In fact, it seems to becoming part of the Western gap year rite of passage. All of Latin America's famous tourist attractions are being used for naked images, including Rio de Janeiro's Christ the Redeemer statue, Bolivia's Salar de Uyuni, and Peru's Machu Picchu, a 15th-Century Inca citadel and Unesco world heritage site.

What is the driving force behind this growing phenomenon? Some travellers are undoubtedly seeking more extreme challenges and Western society as a whole has become much more sexually liberal; however, this doesn't explain the increase in naked selfies and streaking. A logical explanation could be people's need to be admired on social media for their daring. Being a Facebook and Twitter user it is quite amusing what lengths people go to in order to demonstrate that they'll having a 'great time' or having 'wild experiences.' It would be more impressive and entertaining if they did some free climbing or went to a nude disco.

Just to be clear, I am definitely not prudish when it comes to public nudity but there is a time and a place. It appears lots of travellers aren't too aware of what's culturally acceptable in the countries they're visiting. Even worse, some travellers are aware of local cultural beliefs but deem them as conservative and 'out of touch' with modern society. Possibly, but that's not relevant. The bottom line is, if you want to get your balls and boobs out for the camera choose somewhere more appropriate. Stop imposing yourself on other people via social media and show some respect for local culture.

Whatever happened to taking a midnight skinny dip and not telling the whole world about it?

Whats wrong Tammie is the places that they are choosing to do it on. I personally don't believe in God but I DO have respect for those that do. Many of the places that these photos are being taken at are places of religious or historical interest.

Have some respect for the people of these countries and indeed their beliefs. Don't plead ignorance to the rules, regs and LAWS of these countries. Sorry but I am afraid if you get thrown in jail in these places you have no one to blame but yourselves.

When I visit other countries I take time to read up on them, their custom and indeed their laws. You can't tell me that this lot haven't bothered their (naked) asses to do the same?

I don't think we should be too quick to judge people wishing to pose nude while travelling. What is wrong with having a little fun and pushing yourself out of your comfort zone?

There is nothing wrong with having fun and experiencing life to the fullest but when you parade around naked in inappropriate places you are overstepping the mark. Why do young travellers think it's appropriate to converge on a 15th century Inca treasure and World Heritage Site (e.g. Machu Picchu) and take off their clothes? How would they feel if a dozen naked tourists descended on their parents house in order to take nude selfies? The online trend dedicated to nude selfies requires a modicum of common sense. Aside from choosing appropriate places and respecting traditions, using a bit of 'nous' and following the rules will keep you out of trouble. Just ask Ellie Hawkins, the British backpacker recently arrested in Malaysia for posing nude on top of a sacred mountain with nine other travellers. I have some sympathy for Ellie because her actions were a result of giving in to backpackers' peer pressure. When you travel alone and meet a group of new 'friends' there is an underlying drive to join in and avoid travel FOMO (fear of missing out). This case highlights the importance of observing other countries' cultures and laws.