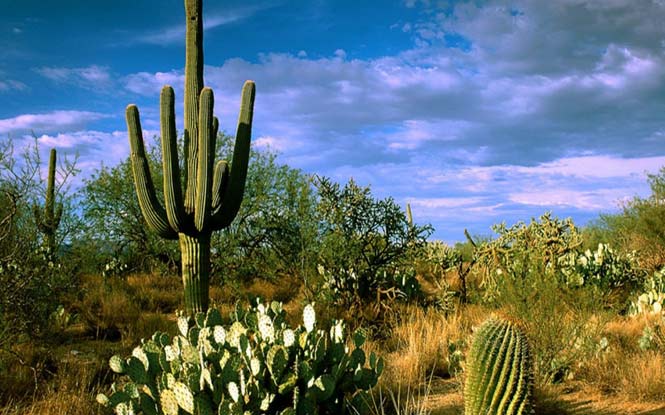 Can plants really help us access mystical realms and impossible cures? A very special cactus from the Andes just may prove that it is possible.

"For every human illness, somewhere in the world there exists a plant which is the cure.” Rudolph Steiner

This concept is a belief shared by many curanderos and shamans throughout the world. In most tribal cultures, native plants are woven into the fabric of their everyday lives. Plants are used throughout the entire life process - from conception to death, for healing and for spiritual purposes. There are even certain plants that they consider as “power plants” - plants with extra-special abilities for healing, as well as opening spiritual portals. These power plants are often called “master teachers” or “teacher plants”, and are considered to be spiritual healers, as well as doctors of the flesh. There are a number of different power plants found throughout the Americas. One such plant that goes by the name huachuma, or more commonly referred to nowadays as San Pedro, originated in the Andes and the surrounding desert areas of Peru.

Huachuma (Trichocereus/Echinopsis pachanoi), also known as aguacolla, hahuacollay, pachanoi, achuma, andachuma, or wachuma, is a shamanic medicine that some consider being one of the greatest of the plant teachers. It is derived from the San Pedro cactus and comprised principally of mescaline - a psychedelic alkaloid that is also found in peyote (another psychedelic cactus from North America). The effects of mescaline have been described as “empathogenic, (similar to MDMA) and potentially life-changing, promoting radical introspection, healing, and a sense of wonder and awe.”

Along with tobacco, ayahuasca, and coca; huachuma is one of Peru’s most sacred plants. The use of the San Pedro cactus in Peru can be traced back over 4000 years. There is archeological evidence that was found in a region of Peru near the Cordillera Blanca mountain range - once home to the Chavin culture - that demonstrates the long-time use of huachuma in that region. The Chavin were the very first developed Peruvian civilization and greatly influenced all the civilizations of that region, including the Inca.

This evidence can be seen on a stone carving that depicts a “huachumero” (a shaman who works with huachuma) holding a San Pedro cactus. According to archeologists, the carving dates back to 1500 B.C., or perhaps earlier. The Chavin culture created many sacred designs of figures holding the San Pedro cactus - making it the oldest recorded psychedelic medicine. Today, the use of huachuma extends into northern Chile, Bolivia, and Ecuador, where are many curanderos still practice the original Chavín traditions.

Another image, of an owl-faced woman holding a cactus, etched on a ceramic pot from the Chimú culture, dates back to 1200 AD. According to native beliefs, the owl is a patron spirit and guardian of herbalists and shamans. The woman depicted is most likely a curandera (healer) and huachumera.

When Roman Catholic authorities claimed South America as their own during the Spanish Invasion, they tried to suppress the native people’s use of huachuma. This effort only caused the people to keep their ceremonies in secret - perhaps a reason for the common midnight start time for huachuma ceremonies. After the Spanish occupation occurred, Huachuma came to also be called “San Pedro” (Saint Peter) - the Christian saint that “holds the keys to heaven.” It has been said that use of San Pedro can help the user reach Heaven while still on Earth.

In Peru, Bolivia, and Ecuador there are still huachumeros who lead huachuma ceremonies for the same reasons their ancestors did: for prayer, communing with nature, gaining access to the spiritual world, expanding consciousness, and healing on physical, emotional and spiritual levels.

People who have participated in huachuma ceremonies have reported feeling inspired, having a spiritual or out of body experience, more creativity, experiencing a heart opening, healing of trauma, freedom from depression, PTSD, mood disorders, anxiety, chronic pain, and addictions. There are even claims of “miracle healings” with the use of huachuma - sudden healing from chronic issues, cancer, infertility, and more.

Medical research into San Pedro has shown that it can lower high blood pressure, reduce the risk of cardiac disease, has anti-inflammatory properties, and can treat hypertension, anxiety, and nervous conditions.

The San Pedro cactus has powerful antimicrobial properties, which have the potential for preventing the growth of more than a dozen strains of penicillin-resistant bacteria, including Staphylococcus.

It has been said that the goal of the huachumero or huachumera is to make the participant ‘bloom’ during the ceremony - meaning to make your subconscious ‘open like a flower,’ like the night-blooming San Pedro cactus.

Huachuma is typically ingested as either a dried powder or as a tea made from the most potent parts of the cactus. Some huachumeros like to serve it after soaking the dried cactus powder in citrus juice and water for several hours or overnight. The effects can take anywhere from 40–90 minutes to begin and typically last 12-14 hours. A classical huachuma ceremony takes place at night, often not beginning until midnight. Some users may experience nausea or digestive upset. It is said that if a tea is made by boiling the cactus for about 20 hours, there will be little or no nausea. Traditionally, users will prepare themselves for ceremony with cleansing and fasting in the days beforehand.

Depending on the potency of the medicine, huachuma can produce visions and dream-like states. It is during these experiences that many users have received valuable lessons, guidance, clarity, breakthroughs, healing, and awareness of their divinity. People attending ceremonies have reported meeting their spirit guides, ancestors, and otherworldly beings who helped them in some way. Many users will experience bliss-like states, heightened senses, waves of emotions, and a sense of being connected with all life.

The ethnobotanist, Richard Evans Schultes, wrote of San Pedro in the book Plants of the Gods that it is "always in tune with the powers of animals and beings that have supernatural powers… Participants (in ceremonies) are ‘set free from matter' and engage in flight through cosmic regions… transported across time and distance in a rapid and safe fashion". He quotes one Andean shaman who describes some of the effects of the plant: "First, a dreamy state… then great visions, a clearing of all the faculties… and then detachment, a type of visual force inclusive of the sixth sense, the telepathic state of transmitting oneself across time and matter, like a removal of thoughts to a distant dimension".

Huachuma has been called a “grandfather medicine” and is often referred to as abuelo, which means grandfather in Spanish, because of the wisdom and lessons that can be accessed during an experience with this ancestral medicine.

Although it is legal to grow the plant for ornamental purposes, it is illegal to ingest it in the United States and many other Western nations. It is legal in the Andean countries of Peru, Bolivia, and Ecuador. As far as other Central and South American countries - it is still a “grey area” - not clearly defined as legal or illegal in many of these countries.

Prosecutions do not commonly occur, yet they do happen. In 2013, a man from Illinois was sentenced to 2½ years’ imprisonment for possessing (with intent to sell) several kilos of powdered San Pedro cactus.

There are big changes happening around legality. In 2019, Oakland, California decriminalized all entheogenic plants containing indoleamines, tryptamines, and phenethylamines. This allows adults who are 21 years and older to use these plants without fear of criminal punishment. It also specifically decriminalizes their cultivation and distribution as well. The city of Denver, Colorado has also announced they are moving towards legalizing entheogenic plants. Similar changes are happening in Australia, New Zealand, the UK, and Germany, as well as many other European countries.

For anyone who desires a traditional and legal ceremonial experience for their journey with huachuma, it would be best to visit the source - Peru, Bolivia, or Ecuador. It is legal in these countries and there are no reports of “problematic use” of the medicine.

I have had the blessing of sitting in many huachuma ceremonies over the past 10 years. It is always somewhat difficult for me to put my experiences with visionary medicines into words, yet descriptions such as transcendental, enlightening, awakening, healing, and transformative come to mind.

Visions, an abundance of revelations, and life-changing lessons highlight my huachuma journeys. It is a spiritual experience … an expansion of my heart center … a powerful connection with both Heaven and Earth. The embodiment of this process is a long one, and takes endurance, especially if you are beginning the ceremony at midnight or haven’t prepared your body for the medicine.

The effects of huachuma can seem subtle for those who have drunk ayahuasca or journeyed with iboga. This “subtleness” can be deceiving. Huachuma invites us to listen deeply, to tune into the subtleties, and to heighten our senses so we can access the fine-tuned and powerful lessons that this teacher plant wants to share. Huachuma is a strong medicine that deserves great respect for its valuable wisdom and incredible healing potential.

I have so much gratitude for huachuma. Grandfather has been such a loving guide and teacher in my life. My work with this sacred medicine has helped me heal many traumas, connect deeper with my purpose, reawaken inspiration and creativity, and to remember my innate divinity. I hope to see the awareness and respect for huachuma as a valuable healing tool and plant medicine continue to grow through our modern culture, and that the trend of legalization sweeps across the entire planet - freeing all plants and allowing us all to access their healing properties.

Humanity is deeply in need of healing. I truly believe that these ancestral visionary medicines hold incredible potential for helping wake us from the slumbering state that has us hypnotically sleepwalking towards destruction. I believe that natural medicines such as these can help us remember the truth of who we are, our divine purpose, and the unique gifts we each are endowed with. When we heal ourselves we make it possible for everything and everyone else to heal.

Huachuma taught me to let go of attachments, to care for planet earth, to forgive myself to love humanity as a whole, we are ONE with the universe!! Also taught me to be patient with my journey.

Beautiful, inspiring article. Is there any place in California where one may experience a huachuma ceremony?

Thank you for writing this very respectful and informative piece. The subtlety of the medicine shines through your words. I am just preparing for a Huachuma retreat and this is a very supportive narrative.

Great article and information! Infinite thanks!

Huachuma revealed to me that - ants, far more plentiful than humans, are actually the silent rulers of the planet.

Huachuma and all psychedelic plants need to be legalized immediately.

Not really any questions thank you!

A wonderful read indeed and thanks for sharing. These plants are the reasons why thousands of years ago people were able to build very complex structures because they provided the required missing psychological software.

I love this!!! Huachuma helped me break free from an addiction to alcohol. Thank you for shining light on this medicine. I love your articles. You are an amazing writer with such important wisdom.