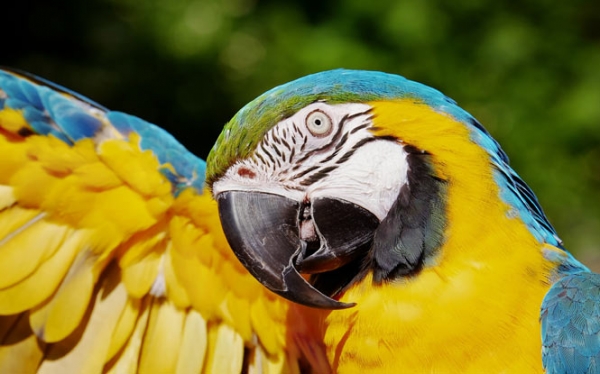 The Magic of the Macaw

The gorgeous brightly colored macaw parrots are native to many Latin American countries from Mexico to the Amazon rainforests of Brazil. They are often referred to as guacamaya in Spanish. The name macaw actually comes from the Brazilian Portuguese word for the bird - macau. There are 17 species of macaw, several of which are now endangered due to illegal trapping for domestication and trade, as well as the destruction of their habitat in certain rainforest areas.

Many people are fascinated by the brilliantly colored plumage, the intelligence, and the playfulness of these incredible birds. Bold blues and yellows, scarlet reds, and bright emerald greens paint the feathers of the various types of macaws. Although there are variations of size in the different species, macaws in general are one of the largest of parrots. The Hyacinth Macaw has a wingspan of over 4 feet.

Although the macaw was not native to the lands north of Mexico, they were still valued and revered by many of the indigenous cultures of North America. Macaw feathers were often obtained through trade relationships with tribes from the south. The feathers of these brilliantly colored birds adorned prayer sticks and were used in healing ceremonies. Their feathers were not the only thing that was collected by certain tribes. The Anasazi, Pueblo, O'odham, and Zuni tribes were all known to keep the birds as pets and breed them in captivity. The Hopi, who descended from the Anasazi, have a Parrot Kachina spirit. The macaw was seen as a guardian associated with the direction of the south, as well as a symbol of summertime, fertility, and healing. The Pueblo people saw the macaw as a symbol of the sun.

For many of the tribes of Central and South America, they believe the macaw brings healing through color and light. The macaw is also considered a valuable part of the vitality of the forest - as they forage fruits and nuts and then drop seeds through their excrement they assist in propagating life in the forests. The macaw is a sacred power animal for the Inga tribe of Putamayo, Colombia. It represents grace and ease. It is the guardian, the protector of the air element and of the winds, carrying prayers to the heavens. The Bororo Tribe of Brazil considers the macaw a messenger of the gods and ancestors. The macaw is often a symbol of sacred union and lasting relationships. This idea is rooted in the fact that the macaw forms a pair bond and mates for life. The lifespan of a macaw can reach 80 years. Along with breeding, macaws also share food with their mates and enjoy mutual grooming.

To many tribes the macaw is also a symbol of song and communication. Their ability to mimic human speech has led to a belief in some tribes that these birds are sacred communicators between the human and the bird worlds. In the book Animal Speak, author Ted Andrews writes - "Parrots, in this sense, could be linked to ambassadors, diplomats, and interpreters for the bird realm. They have a magic that will enable you to understand others more effectively. They can help you awaken a sense of diplomacy."

Having seen the spectacular aerial dances of bonded macaw mates in the skies above the rainforests of Central America and watched entire flocks of these wildly colored birds fill trees as they traveled the forest corridors, I can attest that the macaw evokes a sense of magic and grandeur. They are a delight to encounter. I have felt a stirring in my spirit whenever I saw them or heard them call to each other. It is no wonder to me that tribes from North to South America have revered this magnificent bird and considered it a powerful spirit animal, a symbol of magic and healing, and even a messenger of the gods. The conservation and protection of the rainforests is a crucial effort for the continued existence of the macaw. I lift a prayer that we humans can realize the need for our rainforests and that we all value the diversity and beauty that lives within these sacred forests. May we all fall in love with the beauty and magic of the macaw and make great efforts to protect the habitat in which they dwell.