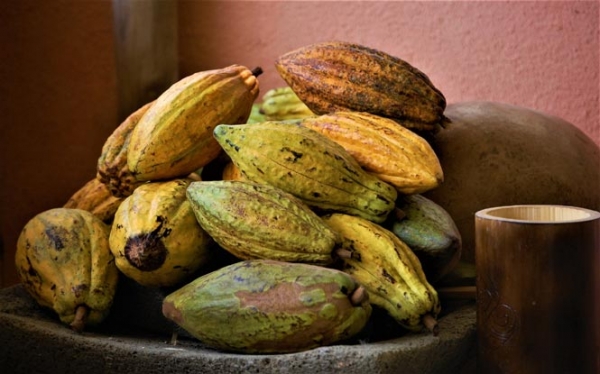 Most everyone I have met in my life simply adores chocolate. It is very rare to meet someone who does not share an affinity with the sweet, creamy treat that multitudes around the globe seek out and consume each every day. Perhaps it is this irresistible attraction that has sparked the popularity of an indigenous tradition - the cacao ceremony.

Over 4000 years ago cacao was domesticated in Central America by the Olmecs, and later popularized by the Aztecs and the Mayans. Yet it is believed that far earlier than that the cacao tree began its life in the Amazon Basin. Recent findings have led researchers to believe that perhaps Ecuador is the birthplace of cacao; other scientists have claimed that the Orinoco Valley of Venezuela is the origin, while others believe it was in Peru. Regardless of where this coveted fruit first sprouted from, it was the Olmec, Mayan, and Aztec cultures that valued cacao so much that the seeds came to be used as currency and a rich drink made from the fermented, roasted, and ground seeds became a sacrament of sorts in an ancient ceremonial practice.

Long gone are the days when cacao was exchanged like money and priests served chocolate drinks in spiritual ceremonies, yet the popularity of the cacao ceremony is making quite a comeback. I attended my first cacao ceremony in 2007. A group of us gathered together in a home in the rural countryside of Costa Rica. Mugs of steaming, rich, aromatic chocolate brew were passed about and we were instructed to drink, quiet the mind, and open the heart, it was a very simple ceremony yet I was surprised to find myself on a journey of emotional depth and personal revelation. This initial experience inspired me to explore cacao - the history, ceremonial use, medicinal properties, and more. I attended more cacao ceremonies and began learning how to work with cacao as a medicine and in ceremony.

In 2012 I began leading cacao ceremonies in Costa Rica. I gathered a group of amazing people to help support the process. We called ourselves the Mystic Heart Sacred Cacao Tribe. We roasted and shelled the cacao seeds ourselves. I made a rich cacao brew that we would bless with positive intentions and healing energy. Each ceremony would begin with a prayer, a blessing, and a silent meditation. Throughout the ceremony there was live music to guide the experience, as well as healing energy work, sound and crystal healing, guided meditation, and movement. It was always such an incredible experience to witness people getting in touch with emotions they had repressed, releasing old painful emotions, opening themselves spiritually, calming the mind and being present, letting go of tension and stress, and feeling peace simply by sitting and drinking pure cacao brew.

One of the reasons that so many people experience a release of tension and even a blissful experience when consuming cacao is due to the presence of anandamide - a neurotransmitter that has been called the "bliss chemical" because of its role in helping support positive moods and feelings of happiness and bliss. Anandamide also plays a role in movement control, pain, and appetite. Low levels of anandamide can decrease happiness, increase fear and anxiety, and interfere with your ability to manage stress. Anandamide is part of the endocannabinoid system that offers protection against stress-related psychiatric diseases, including major depression, generalized anxiety, and post-traumatic stress disorder.

In addition to the bliss chemical anandamide, cacao also contains PEA, phenethylamine. This chemical stimulates the nervous system and triggers the release of pleasurable compounds known as endorphins. Phenethylamine has been called the "love chemical." PEA also stimulates the production of dopamine, a neurochemical related to sexual arousal and pleasure. PEA acts as a potent antidepressant and increases during times of romantic connection. PEA is known to increase when we fall in love and also at the time of orgasm. This is most likely a big part of why chocolate has been associated with love and romance.

Cacao not only serves up bliss and love chemicals, it helps to increase the brain’s level of serotonin - the "feel-good chemical." Serotonin plays a major role in maintaining positive moods, emotional well-being, proper sleep, and numerous behavioural and physiological functions. Low levels of serotonin can be cause for depression, lethargy, and even suicidal tendencies. Many women intuitively turn to chocolate during PMS and menstruation, when serotonin levels are typically lower. People often consume chocolate as a medicine without even realizing that they are doing so.

Another feature of cacao is that it has been believed to help decalcify, stimulate, and activate the "third eye” or our spiritual-psychic chakra. The third eye has been said to be responsible for psychic abilities, clairvoyance, and certain spiritual experiences. Some people believe that the third eye must be "open" for spiritual awakening to occur. The pineal gland, which is the actual physical home of the "third eye", greatly benefits from an increase in blood supply. When cacao is ingested, nitric oxide is released in the bloodstream. Nitric oxide is a powerful vasodilator - meaning that circulation and blood flow is increased and thus the pineal gland is stimulated. Many people have reported spiritual experiences during a cacao ceremony or drinking cacao before meditation, perhaps due to the stimulation of the pineal gland and the activation of the third eye.

Overall leading cacao ceremonies has been an extremely enjoyable experience. The return of this ancient practice provides a gentle and safe way to explore a spiritual ceremony, experience an ancient plant medicine, and receive an opportunity for emotional healing. I have been witness to breakthroughs, emotional and spiritual shifts, feelings of bliss, and heart-openings through my work with cacao ceremonies. After holding space for so many people, from so many different walks of life, and to see them have these experiences during ceremony I feel so deeply grateful to have come to know cacao as more than a delicious dessert or a hot drink to warm a winter night. If you have the opportunity to attend a cacao ceremony in the lands where cacao first grew from it is sure to be a unique experience you will not forget!

I started drinking cacao after my primary physician suggested I do so because I have severe PAD that was destroying the muscles in the perimeters of my legs ... I had no idea of these other qualities.