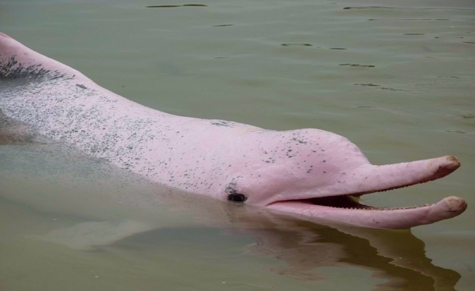 The Amazon River dolphin is a freshwater dolphin that inhabits the waterways of the Amazon and Orinoco Rivers in South America. It is the largest river dolphin species in the world.

Also known as the boto, the Amazon river dolphin is one of the world’s 3 dolphins that are constrained to freshwater habitat.

Another river dolphin species is the tucuxi or grey dolphin. It is darker and smaller than the boto, with a shorter snout, and a distinctive triangular dorsal fin. The tuxuci is found in larger groups and unlike the boto, jumps out of the water.

The Pink River Dolphin is widely distributed throughout much of the Amazon and Orinoco river basins.

Normally it can be found in lowland fast flowing, whitewater rivers, clearwater or blackwater rivers. It is also present in the largest tributaries, lakes, confluences and seasonally flooded forests.

Like its relatives elsewhere, the boto’s habitat is threatened by river development projects. Hydroelectric and irrigation schemes separate rivers in bodies of waters, which may reduce the species’ range and its ability to breed.

The boto is a pale pink colour, and is different from other dolphins in that it has a flexible neck, which allows it to move its head left and right.

It has a long snout, a rounded head and small dorsal fin, with overall length varying from 2 to 3m.

Poor in vision, it relies on an internal sonar system to manoeuvre under water and find food.

The boto feeds on fish – it depends on healthy fish populations for its survival – and other aquatic organisms such as turtles and crabs.

The boto is generally found in groups of 2 to 4 individuals, although it can occasionally be solitary.

Historically, the boto has been spared human persecution because of the belief that it has special powers.

Today however, it is increasingly viewed by fishermen as an unwanted competitor for fish.

The boto can also get tangled up in fishing nets, or suffer wounds by colliding with boats.

To date however, no major reduction of their range has been observed.

Another threat for the boto comes from the petroleum industry in the Amazon and Orinoco basins. In Colombia, armed groups have blown up oil pipelines, causing irreparable pollution to aquatic ecosystems where the species is found.