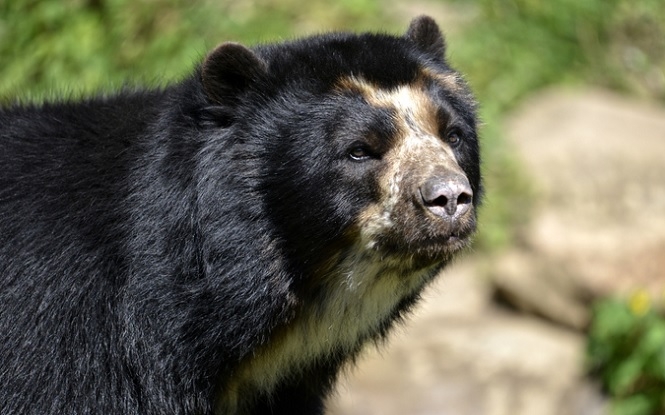 The Andean Bear: All You Need To Know

The Andean bear (Tremarctos ornatus), commonly referred to as the spectacled bear, is the only bear in South America and one of the smallest members of the Ursidae family.

The Andean bear has unique brown or cream markings seen near the eyes. With a distinctively small muzzle, it is the last surviving animal in the subfamily of small-nosed bears.

Spectacled bears are indigenous to (or only discovered in) the Andes, and closest alp ranges from western Venezuela to western Bolivia.

Cream or whitish markings surround these animals' eyes. The light colour variably stretches down to the bears' chests and throats, offering each individual a different set of designs.

Male bears reach about 1.2 to 2 meters in height and weigh between 100 to 200 kg, while female bears are usually about a third smaller and sometimes half their weight. On average males weigh about 115 kg and females average about 65 kg.

Spectacled bears are South America's only bears and are found almost entirely in the Andes Mountains, from western Venezuela to western Bolivia. Some have been recorded in eastern Panama by they are mostly restricted to northern and western South America.

Habitat ranges from mossy and cloud, stunted elfin forests and rainforests to thorny dry forests. They will also feed in grasslands close to forests.

These animals are mainly vegetarian, feeding on flowers and fruits – flowering succulents, bromeliads, are one of their choices! They will occasionally supplement their meal with birds, small rodents, and insects, but only 5 to 7% of their diets is meat.

When they uncover agricultural fields, the bears will sometimes consume crops and livestock, leading to human conflicts.

Andean bears are normally solitary and shy but may crowd nearby food sources. Like other bears, they make tree platforms created of sticks and broken branches to relax or employ as a feeding spot.

But unlike other bears, spectacled bears don't hibernate as food sources are easily obtainable all year round. They are mostly diurnal or functioning throughout the day.

While their approximate age in people care is about 20 years, it's not unusual for them to stay into their late twenties or sometimes into their early thirties. These animals' longevity in the wild is unspecified.

Ecuador has the highest density of Andean bears. One of the best places to see Andean bears is the Maquipucuna Cloud Forest Reserve & Ecolodge, two hours drive from Ecuador’s capital, Quito. The Andean bear can also be seen at the Cayambe Coca Ecological Reserve and the Pimampiro viewpoint. The travel agency SouthWild offers a 30-50% probability of seeing this bear at any time of year.