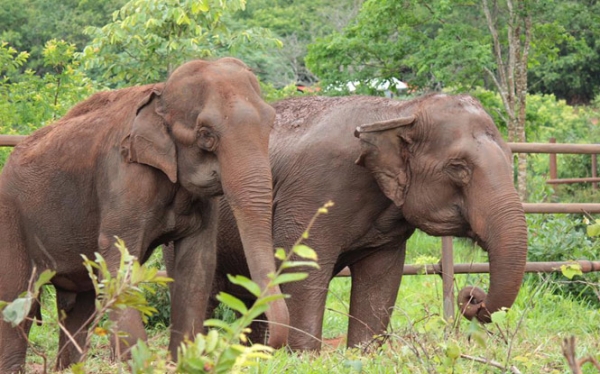 South East Asia has long been associated with the global effort to preserve elephants. Countries such as Thailand, Cambodia, and Vietnam are home to dozens of sanctuaries that take in ex-working elephants and give them, their families and sometimes their handlers a new home.

South America has also begun to take the problem of its legacy working elephant problem to heart. A new organization working with the Global Sanctuary for Elephants was recently opened in Brazil.

The first two residents of this sanctuary are a pair of female Asian elephants who spent some forty years working in a circus together. They became the first to elephants to make a new home at Elephant Sanctuary Brazil in October, 2016.

Located in Mato Grosso, which is in the west of Brazil, the sanctuary covers an area of some 2,800 acres. The two majestic old elephants now have free run of much of that area, as they look forward to a happy and healthy retirement. A representative of the sanctuary has confirmed that the elephants have settled in, and appear to be happy.

Having spent most of their lives working in a circus, these two elephants are unused to life in the semi-wild. Furthermore, they were somewhat institutionalized as they had spent the last years tied up, having become far too old to perform for the circus. So, making a move to the open land of the sanctuary could have been a very disturbing event. However, it seems that the worries of the sanctuary owners were unfounded, and both elephants have adjusted well to their new lives.

Furthermore, there had been some aggression between the two elephants whilst they were in captivity, and they had been kept apart because of this. There were concerns that this aggression would continue back in the wild. Once again, these fears were proven to be wrong, and the elephants have formed a close bond.

The sanctuary operators believe that there are over fifty working elephants that are living out their retirement in captivity. Many having to cope with harsh, restricted living conditions. The sanctuary aims to offer a home to as many of these animals as it can. Built on the site of an old ranch, the sanctuary has full veterinary facilities, to keep its inhabitants healthy as they roam the large expanse of mostly unspoiled land.

Similar elephant sanctuaries around the world have worked wonders with what were presumed to be problem elephants and in some case even man killers. However, in almost every case of an aggressive, dangerous elephant being moved to an open sanctuary, their behaviour has shifted back towards being placid, content and happy. Elephant Sanctuary Brazil believes that it can achieve similar results with aging ex-working elephants in Brazil. The task now begins to track down these animals and convince their owners to hand them over to better care, and the free and full life they will enjoy as they explore this exceptional new animal sanctuary.