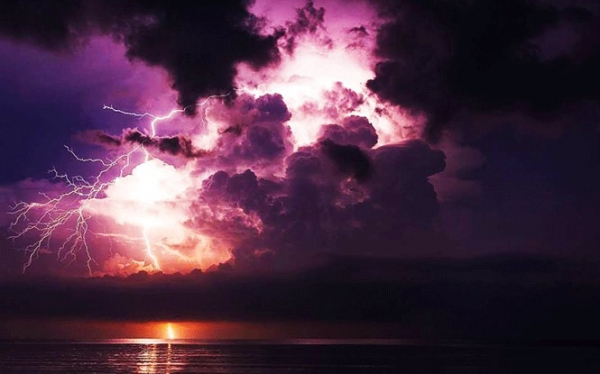 Around the world, atmospheric and climatic conditions lead to natural phenomena that leave people who witness them dumbfounded. And so, it wouldn’t be completely wrong to say that Mother Nature can often leave us more stunned that any advancements in technology ever could. One such spectacular natural event is the Catatumbo Lightning in the lesser-known area of north-western Venezuela, where the Catatumbo River meets Lake Maracaibo.

The storm is not an odd fierce strike here and there. Oh no! It occurs on average 260 nights a year and up to 280 times per hour. It rages on for up to 10 hours each night. That's an earth-shattering 1.2 million lightning bolts per year. No wonder the Catatumbo Lightning also gets known as ‘the everlasting storm’ and ‘The Beacon of Maracaibo’.

The persistent flashes of the lightning are so strong that they are clearly visible from 250 miles (400 kilometres) away. And because the storm lasts for up to ten hours a night, there is almost near constant illumination of Lake Maracaibo and the surrounding areas. In the past, colonial soldiers have also been known to use these bright flashes of light for their navigation.

Researchers are not really sure what causes so much lightning at the mouth of Catatumbo River. One theory is that the methane from the oilfields below the lake increases the conductivity of the surface of the water. The methane gas gets carried into the atmosphere by the strong winds blowing in from the Andes Mountains located nearby. Another theory suggests that uranium deposits in the bedrock attract more lightning bolts. Neither one of the theories has been confirmed so far. So as of now, the reason behind these lightning strikes has been credited to a powerful composition of topography and wind patterns.

One surprising element with these consistent lightning bolts is the prominent absence of accompanying thunder. Some people are of the belief that Catatumbo lightning does not cause thunder, this is actually a myth. The reason behind the absence of audio is due to the fact that the storm occurs almost 30-60 miles (50-100 kilometres) away from the witnesses. Science says it is next to impossible to hear thunder if you are located 15 miles (25 kilometres) or more away from the lightning bolt. So that explains it!

The Catatumbo lightning also finds a mention in the history of Venezuela. A poem called ‘The Dragontea’ written by a Spanish poet in 1597 narrates how Sir Francis Drake’s 1595 attempt to capture Maracaibo failed because of Catatumbo lightning. His attempts to launch a clandestine raid and the subsequent attack were defeated when the ceaseless lightning illuminated the lake at night.

Visit the nearby villages of Ologa or Congo Mirador to witness this natural wonder. Tours to the Catatumbo Lightning run from Mérida, a lively town at the foot of the Andes. The lightning is at its most spectacular at the height of the wet season around October, which is perfect timing if you also want to visit Venezuela's number-one attraction, Angel Falls in Canaima National Park. Both attractions are utterly spectacular in the wet season, and should be on every travellers' bucket list.