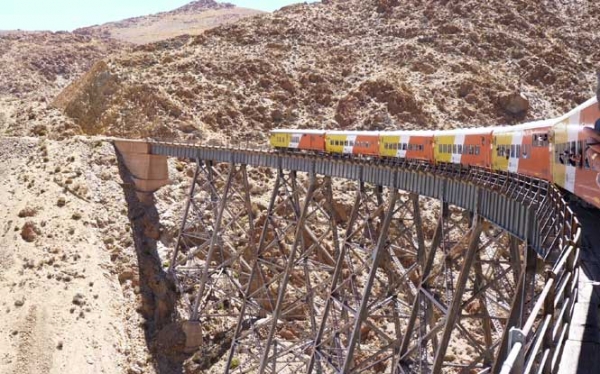 If you’re a ‘train person’, Central and South America have more than their fair share of interesting railway journeys. Everyone knows about the scenic trains to Machu Picchu but there are many more. This selection is by no means exhaustive, but it will whet your appetite, such as the route into Atlantic forest of southern Brazil or the Chihuahua-al-Pacífico railroad to Mexico’s Copper Canyon.

To the end of the world

Eight kilometres west of Ushuaia is a remnant of Patagonian history – the train to the end of the world, in the Pipo River valley. Built by prisoners to transport wood from the forest, it operated until 1949 - the prison closed in 1947 – before re-opening in 1994 as the New Prisoner’s Train. It’s the first steam locomotive built wholly in Argentina and recreates the prisoners’ journeys via audio guides along the final seven kilometres of original track. The scenery is, as you’d expect, quite impressive. Visit: trendelfindelmundo.com.ar/

A feat of engineering

Built over a century ago in 1899, the original route from Quito to Guayaquil is both memorable and impressive, navigating ravines, rivers, cloud forest and mountains with limited technology. It came at a cost with around half of the 3,000 Jamaican and 1,000 Puerto Rican workers dying during construction. Nowadays, visitors can ride the ‘Devil’s Nose’, a 12-km spine-tingling section down the slopes of the Andes. There are plans to restore the original route too. Visit: ecuadorrail.com/trains-of-ecuador/devils-nose.html

In southern Brazil is one of the continent’s most scenic railway journeys, the Serra Verde Express, and the only one to cross the Atlantic rainforest. Construction began in 1880 - it was considered an engineering marvel with its innovative bridges and viaducts. It still travels along 110 kilometres of railroad through the largest preserved area of Brazil’s Atlantic forest – which is as spectacular as it sounds. The three-hour trip leaves Curitiba to Morretes daily and to Paranaguá on Sundays. Visit: serraverdeexpress.com.br/site/conheca.aspx?cod=73

Argentina’s best known route is Tren A Las Nubes, or Train to the Clouds. It’s one of the world’s highest railways and now operates as a heritage tourist route. The 217-kilometre trip starts in Salta, 1187 metres above sea level, then rises to a maximum height of 4200 metres towards the Chilean border. This journey has it all - switchbacks, spirals, tunnels, viaducts and zigzags. It’s a 16-hour return trip but many stop in San Antonio de los Cobres to see the salt flats of Salinas Grandes. Visit: trenalasnubes.com.ar (Spanish only)

Crossing five climate zones, from sea level to 2438 metres elevation, the Chihuahua al Pacífico (Chepe) railroad is relatively new, built in 1961 and travels 644 kilometres between Chihuahua City, Chihuahua, and Los Mochis in Sinaloa. The scenery is stunning and the ride incudes a 180-degree turn inside a mountain. Stops include the Copper Canyon while the section between Bahuichivo and El Fuerte is the most spectacular with an array of waterfalls, canyons and bridges. Visit: ss-tours.com/the-chihuahua-al-pacifico-cheperailroad