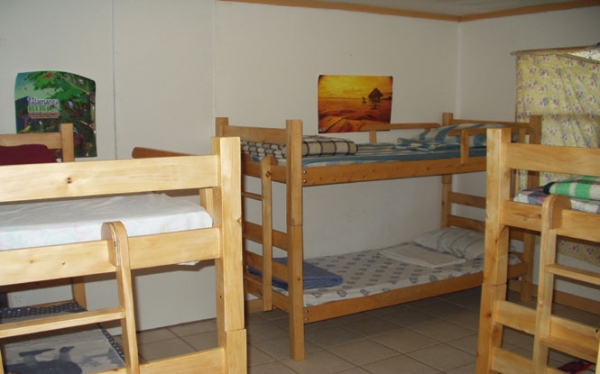 It’s almost inevitable that at some stage in your travels, you’ll stay in a dorm. It be could a comfortable four-bed room with its own bathroom, or a 24-person dorm where anything goes and the shared bathroom is on another floor. And with dorms, comes a huge variety of people. Some may lead to lasting friendships - others you may want to clobber with your backpack after five minutes.

Respecting your fellow roommates is the first key to dorm living. If you’re coming back at four in the morning, that’s fine, but carry a torch so you don’t wake everyone up and try and have your sleepwear and toiletries on your bed so you’re not rustling around in your rucksack at an ungodly hour. If you’re leaving early the next day, pack the day before, rather than late at night or early morning. Don’t be the dorm’s resident noise-maker.

It’s true that everyone’s chosen to book a dorm, but that doesn’t mean any amount of noise can be justified with ‘Well, if you wanted peace, book a private room.’ All types of travellers may need to travel on a budget and those who don’t want to party till the early hours or have to get up for an early flight or tour are entitled to at least a decent night’s sleep - so keep your Skype chats for the common area.

Taking the bottom bunk is a good idea if you’re frequently liable to come back slightly worse for wear - easier for you and quieter for others. Likewise, if you’re not a party person, don’t expect a dorm to be the most tranquil place on earth. If you start complaining about every little noise just because you’re asleep, you won’t do yourself any favours. But do set that ringtone to silent or vibrate at night - there’s nothing worse than mum or dad forgetting time zones, calling you and waking up 10 people in the process.

Which neatly ties in with hooking up. It’s common to meet someone at hostels, but having sex in a dorm is a no-no. It does happen, but no-one appreciates it and it is disrespectful. Get a private room for the night if you’re already a couple who’ve met travelling or find somewhere else in the hostel where you can have your wicked way...

Space can be an issue in dorms. If it’s at a premium, don’t spread your bags about, leaving little or no space for anyone else. Prop your rucksack upright once you’re done with it or at the very least, stack your bags on top of each other. And definitely don’t use someone else’s bed for any of your belongings. If there are lockers, use them.

Some dorm mates are much tidier and cleaner than others - be one of those. Communal kitchens and bathrooms can get dirty so if you’re particularly squeamish, you should re-consider dorm accommodation. Other nos include farting where possible, and bringing smelly food into the dorm. And while there’s nothing worse than the dorm-mate who thinks showers aren’t that important, it’s equally annoying when someone hogs the bathroom so keep it short and sweet.

While most people are honest, some people do steal from dorm-mates so avoid any awkward moments by locking your case and valuables, even when you’ve just gone to the bathroom. It’s worth bringing earplugs, a torch with a muted, low setting, or using the one on your phone if it has one, and flip-flops for the bathroom.

And remember, hostels have changed dramatically in recent years. In major cities and popular spots, there’s almost no need to stay anywhere too shabby. Pod-style rooms where each bed has its own light and power point, are becoming increasingly common so do some research and make your dorm stay as comfortable and pleasant as possible.