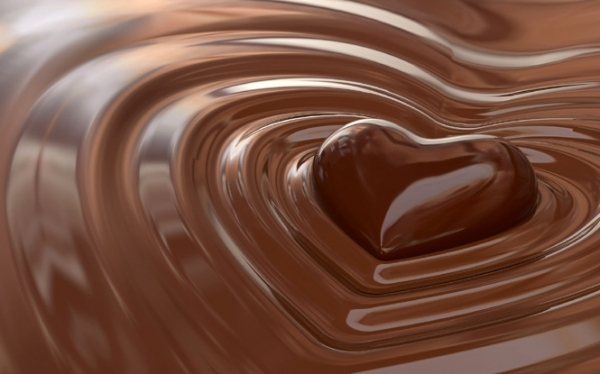 For the Love of Chocolate

It is a known fact that many people love chocolate for the rich taste, and the aphrodisiac powers associated with it. Chocolate is consumed on a daily basis by millions of people all over the world. In the United States, it is reported that over one hundred pounds of chocolate are consumed every second! This raises many tasty questions: Where did chocolate come from? How is it made? Is it really a gift from the Gods?

How chocolate is made

It takes about 400 cacao beans to make one pound of chocolate. The beans are then roasted for up to 2 hours at a temperature of approximately 210 to 290 Fahrenheit. The high heat allows the beans to dry. Once dry, the outer shell is removed and the producer is left with the cacao nibs. The nibs are then crushed and grounded into a thick paste called chocolate liquor. The liquor then gets refined, and the fat is removed. This is also known as cacao butter. The butter is extracted and grounded to cacao powder. Depending on the type of chocolate that is being created, different ingredients are used accordingly.

White Chocolate does not contain any cacao solids. It is said that many countries do not consider white chocolate to be true chocolate. White chocolate was first introduced by Mars Incorporated in 1955

Pure Chocolate is chocolate liquor. It is considered pure ground and contains a minimum of 75% cacao.

Where did chocolate originate?

The earliest historical clues to chocolate making go back to Mexico and Guatemala. Evidence of the cacao bean dates back to 1900 BC. The Aztecs believed that cacao was a gift from the God of wisdom. Cacao beans were considered so valuable it was used as a form of currency. For example, the Aztecs used a system in which one fresh avocado was worth three beans and one turkey cost one hundred cacao beans.

Tropical evergreen cacao trees, the seeds of which are made into chocolate, are native to Central and South America. Theobroma Cacao is the botanical name of the tree that gives us chocolate, which literally means ‘food of the gods.’ Theobrama Cacao - the tree’s modern generic Latin name - actually derives from the Mayan word ‘cacao’ meaning ‘god food.’

The word chocolate comes from the Nahuatl word “chocolatl”. The word as we know it derives from the Spanish language. Spanish conquistador Hernan Cortes is known for first observing chocolate in 1519. Cortez wrote about his experience with chocolate, stating he would consume it at least once a day, because he was told of the powers it had over women. The Aztecs considered chocolate a very special commodity. They believe that the God Quetzalcoatl was cast away by other gods for sharing chocolate with humans. Jose De Acosta, a Spanish missionary who lived in Peru and Mexico, wrote about the strong influence of chocolate. He writes:

"The Spaniards both men and women that are custom to the country are very greedy of the chocolate they say they make diverse sorts of it some hot some cold and some temperate and put there in much of that chili yeah they make Pace thereof the which they say is good for the stomach and against the catarrh (word for cold and flu).”

Pre-Conquest chocolate was almost always a beverage, which had many forms and flavourings. This bitter beer-like drink which was of major importance to the Maya and the Aztecs started the chocolate craze.

Remember to purchase fair-trade chocolate as cacao plantations are often criticised for poor working conditions and the destruction of rainforests.