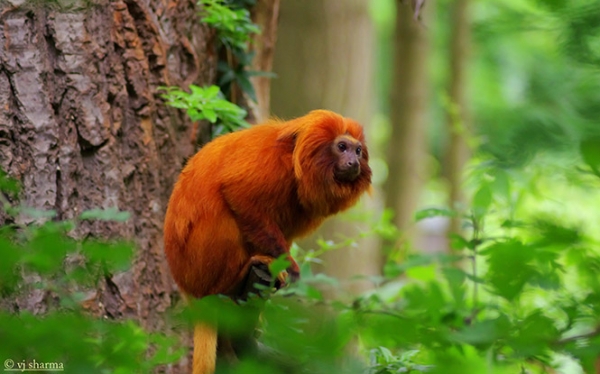 The Lions of Brazil

They are not very hard to spot with their illuminating, long silky golden hair contrasting against the green leafy trees which engulf the tropical rainforests. Their orange hair frames their face somewhat resembling a male lions’ mane. This is in fact where they get their name from, as they as known as the Golden Lion Tamarins, native to the Atlantic coastal forests of Brazil.

These small squirrel-sized monkeys are probably the best-looking of all the four Tamarin species that exist. They live in small social groups of about four (this usually consists of the parents and their offspring) along the lowland and coastal rainforests, living primarily in the trees. The males help with the upbringing of their offspring which are usually twins and often carry them on their backs. These primates are one of the few animals in the animal kingdom that are classed as monogamous and stay with their partners for life.

Yet with this love story comes a looming darkness as the Golden Lion Tamarin has been classified as an endangered species with just 3,200 said to live in the wild today. The area in which the Golden Lion Tamarins reside has been seen as a preferential area for humans who have relocated to live alongside the coasts, making way for agriculture and ranching and in turn destroying over 90% of the Tamarin’s forest. This has caused these social primates to be confined to small, unconnected pockets of land which can only sustain a small number of groups, hence resulting in the drastic reduction in their population numbers.

There is some good news to all of this however, as in 2003 the Golden Lion Tamarin moved down on the IUCN Red List of Threatened Species from the critically endangered bracket to the endangered bracket, meaning that conservation efforts have paid off as population numbers have started to rise once again. It is believed that by reconnecting the Golden Lion Tamarin’s fragmented forest, 3,200 Tamarins is enough to help save these species from extinction.

The real challenge, however, is to ensure that these reconnected pockets of land remain protected from human encroachment and development. If we can manage this and find a way in which humans can live alongside wildlife in absolute harmony, we can ensure a safe future for these social primates for many years to come.

For opportunities to volunteer in Brazil, the home of the Golden Lion Tamarin, please visit the Volunteer Latin America website.