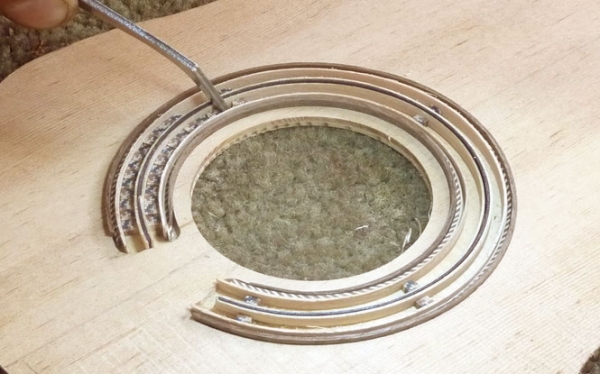 Have you ever wanted to build your own classical or flamenco guitar from scratch? Paul Aguilera is an experienced musician and guitar maker offering a 10 day intensive guitar making course at his workshop in a village called San Esteban, next to the Sierras Chicas of Cordoba in central Argentina. We caught up with him to speak about the guitar building course and to learn more about the area where the course is offered.

What is the history of the classical guitar?

The Spanish or classical guitar or as it’s known in Argentina ‘la guitarra Criolla’ has been around in its present form for a little over 150 years. Before that the guitar evolved from a small four course (double stringed) instrument, the renaissance guitar, into the 5 course Baroque guitar.

In the late 18th century a six string was added and the strings became single.

Around 1850 Don Antonio de Torres Jurado, now known as the ‘Stradivarius of the guitar’, evolved the guitar into a true concert instrument and his instruments where highly sought after and the great contemporary guitarist such as Tarrega played his instruments. The Torres 1860 is one of the finest examples.

Torres’ secret was to combine many ideas already around with a few of his own, turning the guitar into a serious resonant instrument with an increased bass register and clear trebles, as well as an obvious increase in volume.   The ideas that Torres developed are still used today and his template - the Torres template - is used on 90% of classical guitars.

Can you tell us a little about yourself?

I am a musician and guitar maker with many years experience. I learnt my trade in the UK with master guitar maker Stephen Hill. I also studied with Dave Whiteman at the old London Guildhall University Course in East London. For many years I had a workshop and shop in Brighton but in November 2012, I relocated to Argentina with my young family.

I built my workshop in the first year I was here and started building guitars again after a gap of about 2 years. I work mainly to order but I do sometimes make extra guitars to keep in the shop just in case someone passes by and wants to buy one.

I also give instrument making courses in my workshop. A student can learn to make a classical or flamenco guitar or a charango, cuatro, ukulele, there are many possibilities.

Where are you based in Argentina?

We live in central Argentina 100km north of Cordoba city, in the Punilla Valley next to the Sierras Chicas of which the Uritorco Mountain is the highest (1800mts). In local folklore the Uritorco holds a spiritual/mystical importance, it is also known to attract many UFO sightings and this is celebrated once a year in Capilla Del Monte (the town at the foot of the mountain) with a UFO festival that attracts many people nationally and internationally.

We live 6 miles from Capilla Del Monte and La Cumbre (the two largest towns locally) in a village called San Esteban which is exactly halfway between them along the ruta 38.

The village has 700 inhabitants and is situated on the Dolores River; it is a quaint little sleepy village with a healthy mix of local people, as well as those from other parts of the country and the world.

The village used to be connected by rail up until 30 years ago; the rail line started from Cordoba, the state capital, and goes north connecting the towns all the way up to Cruz Del Eje. Much of the villages’ activity was centred on the railway and when it closed it started a slow decline for the village.   Over the last few years there has been an influx of new people buying land and building and this has helped regenerate the village. Every month, for instance the village organises a Feria, the ‘Feria de San Esteban’ which has become well known locally. This has helped create a market for local craftspeople, artists and local products.

The Feria is held on the second Sunday of the month and lasts from 11am until 6pm and has local musicians throughout the day as well as things for kids such as puppetry and clowns.

The River Dolores is a beautiful mountain stream that flows all the year round and crosses the village flowing in to the Dique Del Cajon near Capilla Del Monte and all the way north to Cruz Del Eje.

There’s plenty to do in the area, great for walks up all the local mountains, there’s the Terrones Park not far away, you can hand glide in La Cumbre, loads of rivers to see as well as other picturesque villages.

If you come at the right time of year there are lots of local Fiestas Patronales where you can see horse processions with the Gauchos and listen to local folk music. In September in Capilla Del Monte there is an important Classical guitar Festival called the Andes y Sierras International Guitar Festival with musicians from all over the world coming to perform and teach.

Can you tell us about the instrument making course?

I am organising a new residential intensive guitar building course, where the student produces a guitar from scratch in 10 days. These courses are one-on-one so that all of my attention is solely with the one student, meaning we can work faster, which allows us to complete the guitar in the two weeks.

The course is held in my 100m2 purpose built workshop, which is fully equipped with plenty of space and organized workstations. The workshop is divided into two main parts, the inside which has a main workspace with three large work benches, a machine room and a climate controlled glueing/assembly room, and an outside covered gallery which has my giant 1950’s bandsaw and jointer.

During the course the student learns through hands on practice all the processes required to produce the guitar, the preparation of the soundboard (with an option to design and make the rosette too), the making of the back and bending the sides by hand, making the fretboard and carving the neck and then assembling the guitar in the mould. The instrument will be lightly French polished.

All materials are included and a few basic processes will be prepared in advance just to speed up and maintain a better rhythm, I will be on hand at all times to help but it is the student who builds the guitar and feels the immense pride and satisfaction once the instrument is completed.

The fee also includes 14 nights accommodation in one of three newly built fully equipped cabins with mountain views only 100 metres from the workshop. The area is very beautiful surrounded by elms, pines and very close to the pretty Dolores River.

For more detailed information and course fees and availability please visit the Aguilera Guitars website and contact me via email.

Quote promotion code GUITAR20 when you book online or by phone and receive a US$500 discount. This offer is exclusive to users of the Volunteer Latin America blog.