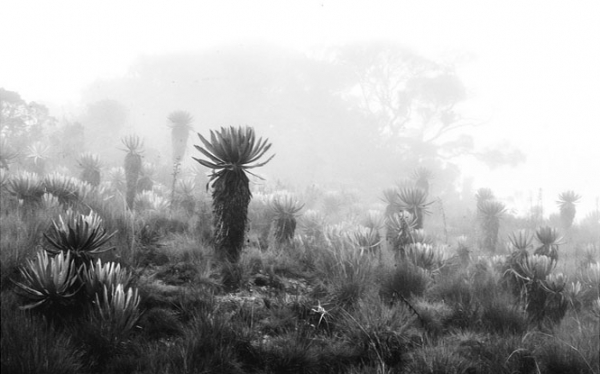 The Andes Mountains have been poetically referenced as the spine of South America. They bisect the continent, stretching from Venezuela southward to Chile and Argentina. They are a spine in more ways than one: the Andes, particularly the high altiplano, are an epicentre for indigenous culture and spirituality and they provide a lot of the continent's water.

The spine of South America is also home to rare, threatened, and overlooked ecosystems which are vital to the existence of millions of people. High up in the towering mountains lies a precious ecosystem that few have taken the time to actually examine in depth: the páramo.

What is the Páramo?

The páramo covers the Andean peaks like a blanket, stretching up the mountains toward their snow-capped crowns. It is the land which remains above the continual forest line - usually around 3000 meters high - yet below the permanent snow line. This sparse alpine tundra exudes a stark yet majestic emptiness, imagery of mountainous plains void of all save several odd types of plants, shrubs, and iconic tufts of grass.

Considered sacred by some Andean indigenous peoples and known to conquistadors as the "Land of the Mist," the páramo has long been a striking environment which evokes intrigue. The most botanically biodiverse of all high-altitude ecosystems, it's a land of changes; temperatures fluctuate from below freezing to as high as 30 degrees Celsius, rivalling the tropical lowlands lying adjacent at times to the mountains.

A mere 20 years ago, hardly any research had been completed on páramo natural history and conservation. However, in the following years, multiple initiatives for páramo conservation have been successful and scientists have begun to intricately study this misty mountaintop wonder.

While this alpine biome might appear barren, what science has revealed is that it's immeasurably rich in its own manner. Considered by some scientists to be an evolutionary hot spot, the páramo is one of the fastest currently-evolving regions in the world. It's also a centre of endemism, which means that due to the area's remoteness and unique climactic conditions, most of the species found in the páramo reside nowhere else on Earth.

Sometimes called the "water tower of the Andes," the South American páramo is also incredibly important in its role of regulating water. Due to its soil type and vegetation, the páramo stores water during the rainy season (and it is also a carbon sink). The páramo then acts as a sponge, slowly releasing the water into streams, rivers, and aquifers of major importance for two South American capital cities: Quito and Bogota. According to the Grupo de Trabajo en Páramos del Ecuador, an astonishing 90% of Ecuadorians depend on water originating from the páramo, as do 70% of Colombians.

Threats to the Páramo

The páramo has been under siege from various threats for centuries, probably the most significant being the introduction of cattle to the ecosystem in the 18th century. Ongoing threats continue to jeopardize this distinct biome. According to the World Wildlife Fund, though the páramo is relatively stable and intact, it is being threatened by burning, grazing, exotic tree plantations and agriculture in some areas.

In the future, climate change could also represent a threat to this fragile ecosystem. Species are so adapted to the particular conditions in the páramo that even minute climactic changes can spell out trouble for the endemic flora. Additionally, the melting of glaciers coupled with lower rainfall means that the ecosystem will dry up and there will be less water for dependent populations.

In Colombia, destructive mining for coal and gold threatens this important ecosystem and the small towns which depend on it for water. Since the páramo is so unique, it has little capacity to recover its original structure and biodiversity once altered.

The largest páramo region in the world is the Sumapaz in the Colombian Andes, where over 50% of the world's páramo ecosystems are located. It has been designated a biodiversity hot spot, and it's also important because its glaciers nourish the country's largest population centre.

Several national parks do a great job of preserving páramo, including Cotopaxi National Park in Ecuador, which preserves nearly 330 square kilometres, and Páramo Wildlife Refuge Park in Costa Rica, where this ecosystem graces the tops of the Talamanca Mountains.

Have you been to the páramo before? Share what you love about this distinct ecosystem in the comments!