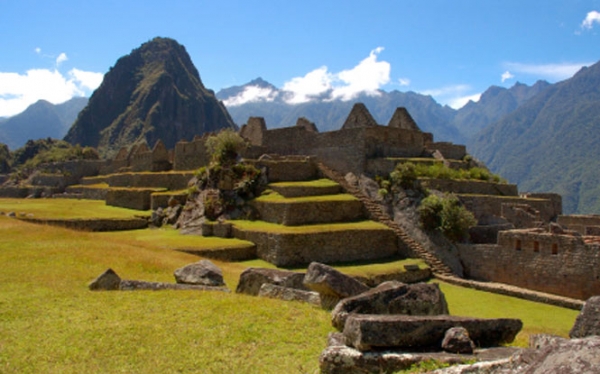 A new wave of travellers has been gradually emerging and unfolding over the past decade. They are seeking meaningful and life-changing experiences. Spirituality has become an influential factor for many modern travellers. Sacred sites such as ancient runes, temples, ceremonial areas, pyramids, caves, and other power spots, have drawn many seekers away from classic beach vacations and amusement parks into jungles, up mountains, down streams, and additional off-the-beaten-path trajectories.

From the pyramids of Chichen Itza in Mexico to The Ancient City of Tiwanaku in Bolivia, there are a plethora of sacred sites worthy of piquing the interest in travellers seeking greater meaning and depth to their journey.

Some people find themselves most attracted to one of these power spots or sacred sites, while others may find themselves drawn to an extended pilgrimage - visiting a variety of sites that span across countries. Although there are many of these sacred sites throughout the Americas, I will share several of the most prominent of these sites - the ones that are continuously attracting increasing more and more mystic-minded seekers.

The legends tell us that Tepoztlán is the birthplace of the feathered serpent god - Quetzalcoatl. This same place is where he underwent his inner transformation and awoke to his full potential as a leader, luminary, and god. Located in the Tepoztlán Valley, outside of Mexico City, at the base of the Tepozteco Mountain. Tepoztlán features a small pyramid temple dedicated to the Aztec god, Tepoztecatl. This was the sacred site where it is believed that Quetzalcoatl received spiritual energy to propel him on his transformative quest. Many modern seekers also journey to Tepoztlán in hopes of receiving that same spiritual energy for their own personal quests,

The Inca left a quite remarkable legacy and Machu Picchu is the featured jewel. Majestically perched above the Sacred Valley - a place with a rich history of ancient civilizations and an otherworldly mystique. Machu Picchu was built around the 15th century as an outpost for the Incan Empire. Many visitors claim they felt immensely energized while visiting this ancient site. Machu Picchu is a glimpse into a long-lost world. It is a perfect place to enhance your journey of self-discovery and awakening, and remembrance of your innate inner power.

Easter Island, also known as Rapa Nui (the ancient name), is home to the mysterious moai - a collection of giant stone monolithic human figures placed throughout the island. The origins of the moai date back between 1200 and 1500 A.D. It is believed they were carved by ancient Polynesians. Little is known or understood about the meaning and history of these impressive relics or the history of the people who made them. Some scientists believe that Easter Island was an important node in a global grid of sacred geography that predates the great floods of archaic times. Many mystically-minded seekers have journeyed to this land of mystery to perhaps feel that almost electrifying otherworldly feel that this island embodies. Others make the trek to seek answers to their own inner mysteries - hoping the potency of this land will help draw forth the answers their soul is seeking.

The first king of the Incan Empire, Pachacuti, was said to be born of the glistening blue waters of Lake Titicaca, which touches both the countries of Peru and Bolivia. It is here that legends claim that the Incan Empire was birthed. Other legends speak of the sun being born of the lake's magical waters. Many mysteries have been reported happening at this lake. To this day locals claim seeing flying ships with lights dive into and emerge from the lake. Sightings of “otherworldly” beings have been reported by numerous visitors to the lake. The lake’s Isla Del Sol (“Island of the Sun”) became a vital religious center, attracting pilgrims from across the ancient empire to visit its shrines on this endless lake. To this day both Isla Del Sol and Lake Titicaca continue to attract pilgrims and seekers - looking for inspiration, answers, vitality, and meaning.

Tikal is said to be one of the largest and most impressive of all the pre-Columbian sites in Central America. Tikal is an ancient Mayan site - its largest city during the Maya Classic period. It is located within Guatemala's Tikal National Park and was built between 200 and 900 AD. Today’s visitors marvel at the Temple of the Jaguar and four other large temple/pyramids among a vast complex of altars, stone stelae, and many yet-unexcavated mounds. In the Mayan language, Tikal means “in the lagoon,” yet its alternate name perhaps reveals the reason so many spiritual tourists find their way deep into the rainforest to visit this site of ancient history and power: “the place of the spirit voices.”

This list is just a peek into the abundance of incredibly intriguing and mystery-laden sacred sites to be found and explored throughout Central and South America. For the spiritually motivated tourist or lover of ancient cultures, the wonders of the Americas could provide a lifetime of opportunities to visit and explore.

Before I end I will leave you with the names of several more noteworthy sacred sites and power spots found in Central and South America. If you Google these names you will surely find an abundance of information if you wish to learn more.