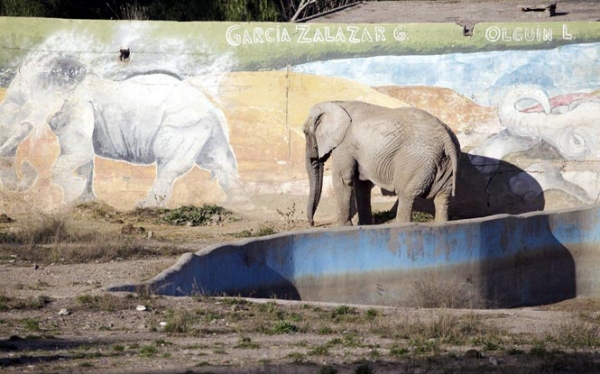 How heartening at the start of a New Year to be able to celebrate a good news animal story from Latin America which potentially marks a significant change in culture and attitude. The Elephant Sanctuary Brazil is welcoming four elephants from the notorious Mendoza Zoo in Argentina (made infamous by its appalling treatment of Arturo, “the word's saddest polar bear”). Public outcry came too late to save Arturo but it seems, through a deal made between the zoo's new director and the Secretary of the Environment, that four elephants, Pocha, Guillermina, Tammy and Kenia will soon be making the trip to Brazil for a new, better life.

Pocha is a 43 year old female Asian elephant who has been kept in a compound with such high walls that she can see nothing but the sky overhead. The Brazilian sanctuary referred to the compound as "a concrete rats' maze". Her daughter, 18 year old Guillermina, was born in the zoo and knows nothing of the world beyond her concrete prison. Kenia is a 31 year old African elephant but there is little known of her past. And the same is true of the only male, Tammy, an Asian elephant. What is known is that these four will soon be leaving their barren surroundings, on their way to a place which will put their needs first. The sanctuaries’ first two residents, Maia and Guidance, have settled in very happily already and there is no reason why the four newcomers will not do the same.

It is estimated that there are 50 more elephants in South America in need of rescue, either from equally badly run zoos or from unscrupulous private owners who use them to provide entertainment as performers. Efforts are currently underway to accommodate another female Asian elephant called Ramba, who is temporarily being held at a safari park in Chile.

Following successful precedents set in Asia and Africa, Brazil opened Latin America’s first elephant sanctuary last year. Scott Blais, the driving force behind the project, set up the sanctuary on 2,800 acres in the state of Mato Grosso, building on his experience gained in Tennessee and elsewhere. The sanctuary opened in October 2016.

Let us all hope that the success of the Brazilian project will spread its message through the whole of South America. Change is happening and there appears to be a shift in people's attitude to animal welfare in South America. This region of the world is emerging as a leader in progressive animal protection.