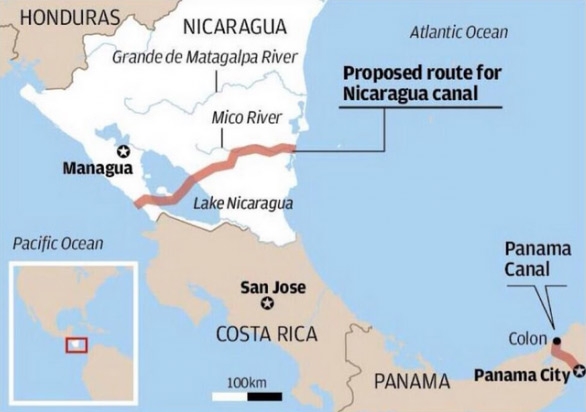 The Nicaraguan Canal - Friend or Foe?

Today many Nicaraguan’s also see the lake as offering a new sort of life blood, one which will feed the country’s economy, through its part in the creation Nicaragua Canal. Supporters say the canal, which will stretch from the Caribbean to the Atlantic, will create a quarter of a million jobs. For a country that is one of the poorest in the region this is a tantalising prospect.

However not all Nicaraguan’s have been won over to the idea. The intended path could displace 100,000 people from their homes and there have already been clashes between contractors and locals. Leading environmental groups have too condemned the plans as posing an ‘extraordinary threat’ to ecosystems with the toxic contamination of the Lake Nicaragua a likely outcome. As five urban centres are wholly reliant on the lake for water this is a terrifying prospect for both the people and the delicate and unique environment that depend on it.

The contractors, a Chinese company called HKND, have shown little enthusiasm for consulting local groups and local people have claimed they have been pushed out of discussions. The use of the Asian company Changjiang Institute of Survey, Planning, Design and Research Co., Ltd for surveying purposes has also stirred up fear. Onlookers have noted their previous project, The Three Gorges hydropower dam on the Yangtze River in China, displaced a record 1.2 million people.

The project may, however, not go ahead at all. Sceptics have pointed out that the free trade zones that come with the canal construction may be the only reason HKND are interested. If it does go ahead construction is scheduled to start in December with the canal ready for use in 2020. For many this seems a short time in which to change a country’s entire structure yet supporters will argue that the canal has been in the making since the first Spanish colonials proposed the idea 450 years ago. And here maybe we have the centre of the problem, from every angle the Nicaragua Canal comes across as a colonial endeavour and one which has profit not consensus at its heart. This in itself is a reason to keep a worried eye on the project.