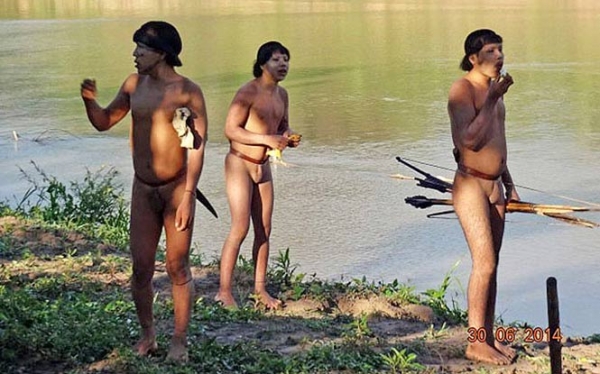 The Uncontacted Tribes of the Amazon

They’re one of the last vestiges of another way of life, living off the land, moving with the seasons. It’s not Stone Age, it’s just different. But in 2014, one uncontacted tribe made contact in Brazil, and it was filmed by FUNAI, Brazil's indigenous organisation.

They appeared on the banks of the Envira River close to the Peruvian border where they made contact with the native people of northern Brazil, the Ashaninka. Survival, a group which promotes the rights of tribal people, believed they left Peru due to potentially fatal attacks, either from illegal loggers, cattle ranchers and drug smugglers.

This particular tribe was found to be from the Panoan linguistic group, a group of languages used by some indigenous groups in that region of the Amazon. They are believed to be descendants of tribes who escaped either slavery or being wiped out completely during a boom in the rubber industry at the end of the 19th century.

But escaping one evil often brings them close to another. They’re often vulnerable to diseases such as measles and even the common cold. Several tribesmen suffered serious respiratory problems and while it can be fatal, they did recover on this occasion. However, issues also arise when they return to their tribe as they may be carrying other bacteria.

With so many threats from loggers, drug smugglers and multinationals, the outside world can put them, and their land, at serious risk. Last March, both the Peruvian and Brazilian governments agreed to monitor tribal land and how they could protect it but on the flip side, the governments’ own dam and road projects pose a huge threat.

These tribes vary in their lifestyle, but it’s acknowledged that while some are nomadic, others live more settled lives, in communal homes with extended families. Practising a hunter-gatherer way of life, their diet is derived from fruit and nuts to fish and animals including tortoises. They tend to live deep in the jungle and choose to remain uncontacted. They are not oblivious to what’s around them and have shot arrows at airplanes in the past.

There are believed to be around 77 such tribes in the Brazilian Amazon, according to research by Survival. For visitors to the Amazon who are considering visiting a tribe, it’s important to ensure the travel company used has a sensitive and ethical attitude. Of course, you won’t be visiting uncontacted tribes, but they may be little-contacted or not amenable to groups peering in. If the tribe itself is involved in the set-up, and tourism is bringing funds in, it is worth considering but if it voyeuristic or intrusive, then no. Check uncontactedtribes.org or survivalinternational.org for more information.