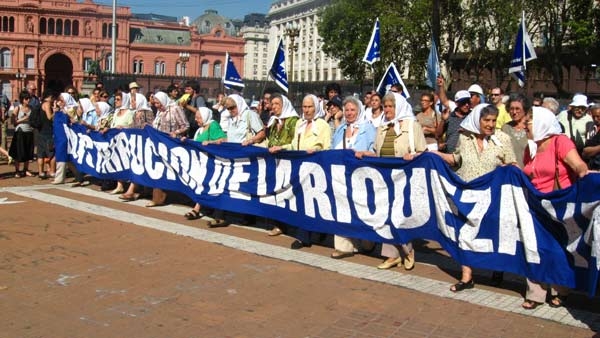 Anyone who has visited Buenos Aires’ Plaza de Mayo on a Thursday afternoon will see something quite thought-provoking. In this spot, the Madres (Mothers) de Plaza de Mayo gather in front of the presidential palace Casa Rosada as a call to action to discover what happened to their children who were ‘disappeared’ during Argentina’s Dirty War.

They’ve been marching since 1977 against the military dictatorship who ruled by terror between 1976 and 1983, a period known as the Dirty War. The gathering began as an act of public defiance, against the government’s state-sponsored terrorism which sought to silence all opposition. Simultaneously, they were searching the truth to find their children, Los Desaparecidos (disappeared), most of whom were murdered by the regime. Latterly, an offshoot group called the Grandmothers (Abuelas) de Plaza de Mayo has been campaigning to find their grandchildren, the ‘stolen babies’ whose mothers were killed by the regime.

Between 1976 and 1983, an estimated 500 newborn babies were forcefully removed from young opponents of the regime. Usually arrested in the middle of the night before, they were tortured at secret detention centres then disposed of, while their babies were given to military families to be raised according to the ‘western and Christian values’ the regime claimed to support. Other babies were adopted by other couples unaware of their background.

Witnesses at the time recall seeing military planes throwing packages into the sky. It was later established these packages contained dead bodies, often to be seen floating in rivers or the Atlantic. Other bodies were blown up and some buried in unnamed graves. The military junta saw it as a crackdown on political dissidents. Around 20,000 people were ‘disappeared’ in this period according to official figures, but many human rights groups put the figure at at least 30,000.

Over the years, there have been occasional glimmers of good news. Most recently, in August 2014, the leader of the Grandmothers of the Plaza de Mayo found her grandson - 36 years after he had been abducted by Argentina’s military junta. He was the 114th missing child found by the group. A fusion musician, his identity was confirmed after he voluntarily visited a DNA bank set up by the group, which contains blood samples of all the members. His parents are believed to have been murdered at La Cacha death camp - his mother was two months pregnant when they were kidnapped. Some former military officers have been on trial and convicted of human rights abuses - but, of course, not all.

It’s a gruesome episode in the country’s history, but one which took place in many visitors’ lifetimes.  Relevant and important, a better understanding of it makes the sight of the mothers and grandmothers of Plaza de Mayo even more poignant. For many people, it remains one of the most enduring images of their time in the Argentine capital.