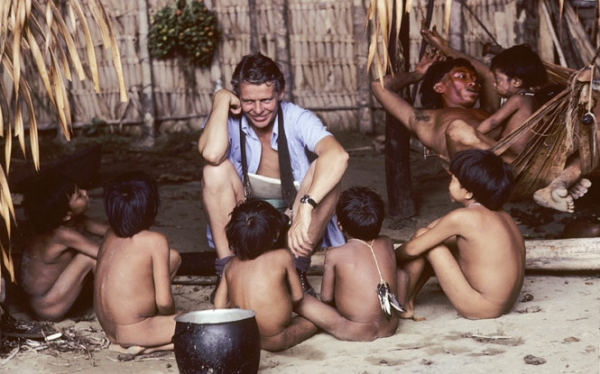 An Interview with Robin Hanbury-Tenison

Robin Hanbury-Tenison is an explorer in the truest sense of the word. He’s spent his life travelling through some of the world’s most diverse environments and was even part of the very first expedition to travel the full breadth of South America. He is also an ardent conservationist and campaigner to help protect indigenous people’s way of life all over the world with his organisation Survival International. This year sees him take some lucky travellers on a tour of Brazil with the help of The Ultimate Travel Company so we caught up with him to speak about some of the issues facing the country in the lead-up to the Olympic Games next year…

Brazil will be on everyone’s radar in 2016 with the Olympics in Rio – what makes the country so special?

Brazil is potentially a great world power, but it still has a long way to go. My organisation Survival International began work there with the exposure of the disaster facing the country’s indigenous peoples. Great strides have been made since then. Many tribes have had their land demarcated and there are many Indian organisations running their affairs. 45 years ago it was feared there would be no more tribes in 10 years. A tribe was becoming extinct every year. Now the population has trebled and there is hope, but many tribes are still being exploited mercilessly.

How does the country compare to the one you visited over 40 years ago?

So much of the forest has been cut down. I first crossed Amazonas and the Mato Grosso in 1958. Then my companion and I were often almost the first people in a pristine wilderness. Today it’s crisscrossed with roads and vast areas are bare arid soil, except for where land has been given to indigenous people or saved as national parks.

Why is conservation of the rainforest in particular so important?

Huge proportions of species depend on the rainforest and disappear when it’s cut down. We really depend on its continued existence for our climate, our health and, ultimately, our survival. The Amazon represents over half of the planet's remaining forests so the fact we are losing it at such an alarming rate should be of grave concern to everybody. It’s home to over 10% of all known animal species, 20% of all known bird species and thousands of indigenous peoples all of who call it their home.

Your tour visits the Regua Reserve of which you are a Trustee. What made you get involved?

I have been involved with Regua for over twenty years and I have seen it grow from a small reserve on the edge of a farm owned by an originally British family, now third generation Brazilian, to a huge area of protected mountainous Atlantic forest. I just love the hummingbirds which visit the reserve lodges.

Tribes have a close relationship to the environment and nature, how do you think this is beneficial for conservation?

Tribal people are the best conservationists. Some of the world’s most diverse and fantastic environments from the Amazon rainforest to Yellowstone Park have functioned perfectly for hundreds, if not thousands, of years as the home of indigenous peoples. Conservation efforts need to take this into account when looking at long-term, sustainable solutions. Very often well-meaning conservation organisations penalise indigenous peoples for doing what they’ve done for generations, with no ill effects, because of the larger scale activities of governments. Also; more than half of our pharmaceutical products come from natural sources. These are lost when their habitat is destroyed and knowledge of their use dies with the tribe.

In your eyes, what kind of future do you see for the tribes? Is their way of life sustainable in today’s world?

Is our way of life sustainable? They should be given the opportunity to choose for themselves how to live. Clearly their way of life is sustainable; it’s our interference which threatens it. If we’re serious about conserving these environments then we should learn lessons from the people who have lived harmoniously in them.