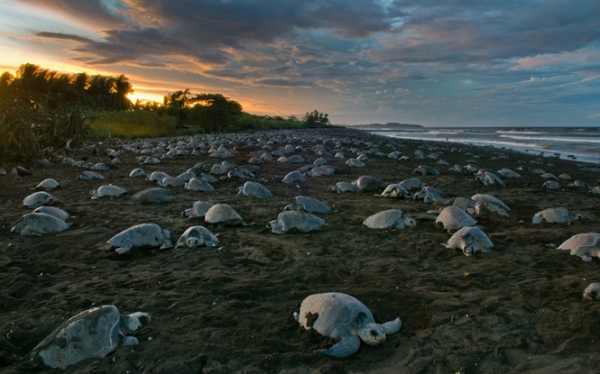 An arribada - mass synchronised sea turtle nesting - is a unique nesting phenomenon common to both the olive ridley sea turtle and the Kemp’s sea turtle. One of the best places in the world to witness an arribada is Ostional beach on the Nicoya Peninsula in Costa Rica. Arribadas at this beach are considered the largest in the world, with millions of sea turtle eggs laid in the black, volcanic sand each year. In 1984 the Ostional Wildlife Refuge was created in order to protect one of the planet's most important nesting sites of the olive ridley sea turtle.

Arribadas occur on a lunar cycle of approximately 28 days. The majority occur around the start of the last quarter moon and during the darkest nights just before the new moon. Sea turtles begin congregating offshore several days or weeks before they come ashore to lay their eggs on the beach.

The size and duration of arribadas varies between the dry and wet seasons. Those occurring in the dry season of January to April tend to be smaller and of shorter duration. In the wet season of August to December, up to 300,000 turtles may lay their eggs on the beach. The largest arribada thus far recorded in Ostional, took place in November 1995 when a calculated 500,000 females came ashore.

Two arribadas may occur in the same month during the wet season. This results in continuous activity during the month with a few days of lower activity and two peaks of maximum nesting.

Observing one of these mass synchronised nesting’s is a must for nature and wildlife enthusiasts. The best months to see the biggest arribadas are from September through November. If you want to visit the refuge during an arribada make arrangements to enter the beach with a licensed tour guide and respect the rules (e.g. no flashlight photography, wear dark clothing, etc).

Crosscheck your visit with a moon phase calendar to maximise your chances of catching one of the natural world’s most incredible events, the arribada.