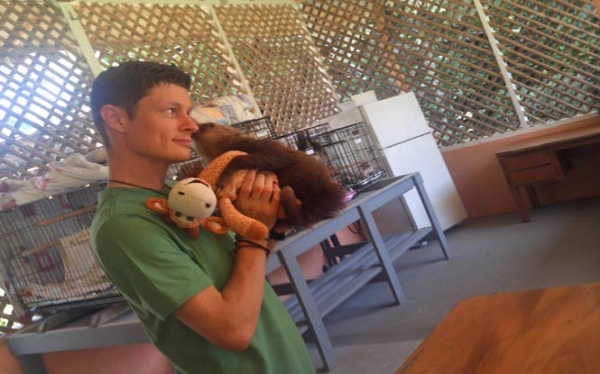 The first time I got up close to a sloth there was a certain sense of awkwardness. I was sitting in a tourist boat in mangrove swamp near Bocas Del Toro and he (or she) was clinging to a branch which had just been cut out of a tree by our guide. Luckily the next time I met a sloth it was under far better circumstances at Sloth Sanctuary Costa Rica.

Before the sanctuary existed sloths had rarely been successfully kept in captivity, no one even knew how long they lived because they had never been studied. But when an injured sloth was brought to the sanctuary’s owner, Judy Avey-Arroyo, she gave it her best try and Sloth Sanctuary Costa Rica was born. That was 23 years ago and the sloth that started it all, Buttercup, can still be found in the sanctuary. She was relaxing in the dining area on a basket chair when we met her.

During our visit to the sanctuary, a very well spent $30 dollars, we toured the facility meeting some of the inhabitants and learning wonderful sloth facts along the way (did you know a sloth can rotate their heads up to 300 degrees? Or that they are neither cold or warm blooded but somewhere in between?). We stroked a few furry heads and wondered at their ‘smiling’ faces as well as at the fact anyone would kill such a majestic animal.

Sloths are under threat from car traffic accidents, electrocution on power lines and general destruction of habitat. At the sanctuary we met one of the baby orphaned sloths who are hand reared until they are ready for the wild again. As part of the more expensive ‘Insider Tour’ you may also see round the sloth clinic and nursery which includes baby sloth incubators. It’s safe to say by the time you leave you’ll be an avid convert to the sloth fan club.

Sloth Sanctuary Costa Rica can be accessed by bus from Cahuita, a lovely little beach town which has its own small reserve ideal for spotting monkeys.