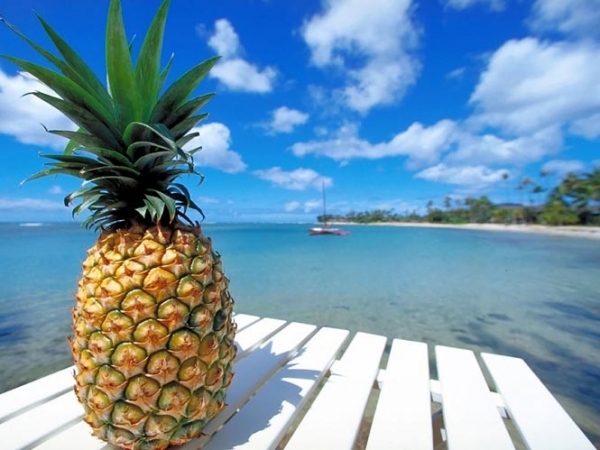 Up the Creek with a Pineapple

It was a beautiful day in Puerto Jiménez without a cloud in the sky. I had just returned from what National Geographic once famously labelled ‘the most biologically intense place on earth'. Corcovado National Park is an incredible tract of tropical rainforest on the Osa Peninsula with amazing biodiversity. It is home to Costa Rica’s largest population of scarlet macaws, as well as countless other wildlife including tapirs, giant anteaters, jaguars and squirrel monkeys.

While taking an afternoon stroll in the outskirts of Puerto Jiménez, I came across a small tour company offering a sunset kayaking trip to see dolphins. This sounded like the perfect way to finish the day and experience the emerald waters of the Golfo Dulce. I entered their office to enquire about availability, cost and the tour itinerary. I was sold, I put my name down on the list and returned to my lodge to fetch my swimming gear and insect repellent.

We met at Pueblo Viejo beach in the late afternoon where a guide introduced himself and briefly described the tour. The tour group consisted of myself and four young females from the United States of America. Shortly before setting off for three hours of light and 'relaxing' paddling around the gulf coastline I noticed a thin dark line on the horizon and mentioned this to our guide. He said there was nothing to worry about and the storm would stay out at sea and wouldn't bother us.

While kayaking through the mangroves I could feel a breeze picking up and see the sky darkening. At no point was the guide concerned until a moderate wind turned into high-speed winds and torrential rain. It soon become apparent we were caught in  the midst of a huge storm! We made it to a small beach bank that separates the river from the gulf. Here, we were told to haul our kayaks out of the water and take cover in the sea - the safest place according to the guide. Submerged up to our necks in the choppy sea was preferable to battling the tropical-storm-force winds and lashing rain on the land.

The seriousness of the situation started to cause panic in the group and you could see the look of fear on a few faces. When one of the group started weeping the guide said he had something that will alleviate the situation and left the 'safety' of the water on a mission. A few minutes later he appeared again with a big smile on his face and something to put all our minds at rest - a pineapple! I found this most amusing but it didn't do much to relieve the fear of possible death. Anyway, he cut up and distributed the pineapple to everyone in the group and set off on another mission. Up until this point I had never tried to eat fruit in rolling waves and sea spray.

Another group on a 'sunset' tour didn't make it to the relative safety of the beach bank and were separated due to the gale force winds. Fortunately, the two guides were able to rescue everyone in the mangroves and reunite the whole group. When our guide returned he informed us that we must make our way to a spot where you cross from the beach bank to our original departure point in the bay. When we reached this spot the other group were waiting for us but despite a sense of triumph being in the air (they all survived the ordeal), there was a sense of trepidation, too. It soon become apparent why.

Although the strong winds had subsided a little the tropical storm had created huge waves, and to reach our intended destination we needed to cross the open ocean in our kayaks. To eliminate the risk of being capsized from taking a straight line, our guides told us that we must paddle out to sea against the waves, turn around, and then paddle to the other side using the force of the waves (e.g. surf kayaking). Not being a strong swimmer this was quite a daunting proposition, but after a pep talk from my guide, chose to show courage in the face of adversity. This was equally a nerve racking and exhilarating experience but one I look back on quite fondly.

It wasn't until I walked into the town of Puerto Jiménez that the reality of what just happened sank-in. The town has been hit by a tropical cyclone and 36 boats had sunk in the harbour, including the public ferry. Storm surges had flooded waterfront properties and there was general carnage on the streets. It was heartening to see how quickly the local community pulled together and supported each other under such circumstances. I retired to my favourite bar to discuss the day’s events with fellow backpackers and tourists.

The next morning I went along to the tour companies office to offer some witty and mild tongue-in-cheek feedback, but a different member of staff was behind the tour desk. I asked her what adventures they had planned for the day. The only thing she could offer me was a sunset and dolphin kayaking tour that guarantees numerous photograph opportunities and lots of relaxation. I told her I'll think about it and let her know. I headed into town for a coffee and a fruit salad.